Brussels is in full blame-game mode today following last night’s rejection by the Cypriot parliament of the bailout package offered to the country by the EU. It’s a veritable whodunit mystery, with the answer depending on whether you’re inclined to believe the President of Cyprus, or the rest of Europe.

All sides agree on one thing – the decision taken by European finance ministers in the early hours of Saturday morning to require a one-time levy on all Cypriot bank accounts in exchange for the bail-out was colossally stupid, plunging the Eurozone into a new crisis and risking a bank run in the country. What cannot be agreed upon is whose idea it was.

Raiding people’s savings accounts is an unprecedented move. Such conditions were not imposed on any other country receiving bailout money, and indeed no such idea was ever even discussed. But Cyprus is a special case. As the likelihood of an EU bailout for the small Mediterranean island increased, worry began growing that the move would actually be a bail-out for wealthy Russian oligarchs who use the island for money-laundering or tax-evading.


Cyprus's banking sector, which is notorious for asking few questions of foreign depositors, is more than five times the size of its GDP. With Cypriot banks heavily exposed to Greece, this has put the economy on the edge of collapse.

Faced with myriad bad options for ensuring that Russian criminal money did not benefit from the Cypriot bail-out, the finance ministers chose a tax on the bank holdings. But the finance ministers say that they had wanted to levy to only apply to savings accounts over €100,000 – the amount guaranteed under EU law on deposit insurance. It was Cyprus President Nicos Anastasiades who insisted the tax be spread to all deposit holders, they say, because he was fearful that the Russian oligarchs would abandon the island if they had to bear the brunt of the cost.

This created the rather absurd situation of the EU guaranteeing bank deposits of under €100,000, except in the event that it is the EU itself taking the money. That deposit guarantee threshold was a major red line to cross. The finance ministers say it was Cyprus, not the EU, who crossed it.

“They have opted for this solution and will now have to explain it to the people of Cyprus,” German finance minister Wolfgang Schauble said earlier this week.

But Anastasiades says it was Schauble and IMF head Christine Lagarde who insisted that the tax apply to all account holders. Back in Cyprus, he has railed against the tax as an 'EU-imposed' raid on savings. Last night the entire Cypriot Parliament voted to reject the bail-out offer, afterwards descending into the streets to celebrate with the cheering crowd, proclaiming that they had fought back for the Cypriot people against the EU.

So far no other EU country is backing up Cyprus’s story, nor has any insider account. A Wall Street Journal story yesterday added further confusion to the mystery when it suggested that it was EU Economy Commissioner Olli Rehn who first put forward the idea, something never even suggested by Cyprus. But the Commission insists Rehn was in fact deeply against the idea and said the levy should apply only above €100,000. "The Cypriot authorities did not accept such an alternative scenario," they said in a statement today.

So it comes down to this question: who do you believe, Germany or Cyprus?

Regardless of who suggested the idea, the fact is that all the finance ministers signed off on it, and they should have known better. If the idea did come from Anastasiades, the other Eurozone states should have recognised it as a trap. Would so many people have been marching in the streets over a levy that only applied to accounts over €100,000? It seems unlikely, though of course there still would have been an outcry over the precedent set by the seizure of private property. Anastasiades may have gambled that if he extended the tax to everyone, it would create such a massive backlash that the Eurogroup would be forced to come back to him with a new, more generous offer for the bailout.

If this is the case, it was a risky gamble. Cyprus is a tiny economy and there are many in Brussels who say it may actually be best to let it default on its debt and expel it from the euro. There is always the possibility that even if the EU denies the island a bail-out, Russia will then come to the rescue with a bail-out offer of its own. But if neither party comes forward with the money, Cyprus would be looking at expulsion from the euro and perhaps expulsion from the EU.

Cyprus’s EU membership was always a bit of an oddity, having been done at the barrel of a gun – demanded by Greece in exchange for signing off on accession of the Eastern European states in 2004. Seven years ago, if you had said that Cyprus’s EU membership was going cause a major EU crisis, most people probably would have thought the cause would be the country’s still-open war with Turkey and the division of the island.

That this crisis has actually ended up being an economic one involving Greek Cypriot banks is a strange twist of history indeed.
Email ThisBlogThis!Share to TwitterShare to FacebookShare to Pinterest
at Wednesday, March 20, 2013 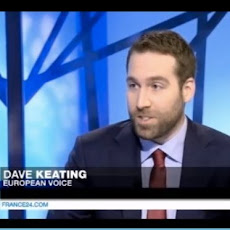